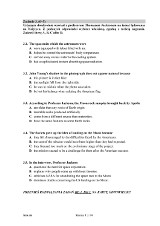 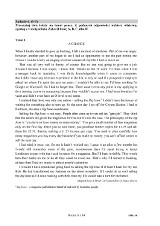 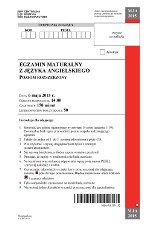 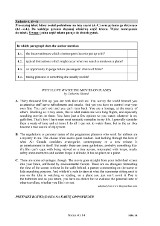 One
Man: You look so elegant! Is this what you wear to work?
Woman: Well, most of the time. I currently work in a call centre and we have formal office regulations on dress code. My team leader is so strict that he sends us home to change. As if we were naughty children!
Man: What about other leaders?
Woman: They let their staff wear jeans and T-shirts. That makes me mad, especially that I can’t see the point of these regulations. To my mind, you should dressappropriately to the situation. In a smart work environment where you meet customers, elegant clothes should be mandatory, but in a call centre it doesn’t really matter what you wear.
adapted from www.h2g2.com

Two
Last week, Pillsbury awarded $1 million to Christina Preston, whose pumpkin dessert earned the grand prize in the company’s cooking contest. I’ve invited Christina to share her experiences with us. Also, joining us today is the culinary historian Laura Field, who’s written extensively about the evolution of food contests. Finally, we’ll hear from the esteemed chef Jeffrey Hike. He’ll comment on judging cooking competitions and tell us how to differentiate between a merely good dessert and a truly inspiring one. And then the three of them will be answering questions from the audience and from our viewers.
adapted from www.whyy.org

Three
You may arrive in the UK thinking you know all about British people. But do the stereotypes hold true? One of them refers to Brits as football hooligans. Now let me dispel this myth once and for all. There’s no denying that Brits invented the game. We know from history that in ancient and medieval times, sports events were sometimes held to settle disagreements. With its seemingly bizarre tribal loyalties, the modern British game could be said to express similar needs. Of course, fans are visible and vocal but only a tiny minority have fights. To my mind, this sport rather brings supporters together, regardless of whether they celebrate victory or have to accept defeat. The results of a survey by the Social Issues Research Centre show that English fans are most commonly associated with violence because of the amount of media attention devoted to it. This is where the stereotype comes from.
adapted from www.independent.co.uk

Tekst 2.
1.2. What is the speaker doing?
A. presenting a panel of judges
B. hosting a competition on TV
C. introducing the guests of a programme

Tekst 3.
1.3. Which of the following is stated in the text as an opinion, not a fact?
A. In medieval times football matches were played to solve conflicts.
B. Football matches nowadays unify fans rather than provoke fights.
C. The media are to blame for the negative image of football fans.

One
I have been doing voluntary work in an animal shelter here in Dublin and it is the most rewarding job anyone could ever wish for. However, it is really frustrating that so many animals have to live in shelters instead of having a safe home. Another problem is that people charged with the ill-treatment of animals are often given community service or pay very small fines. It’s no wonder they do it again. It’s about time the law was revised and more severe punishments were introduced. Our government should finally do something to encourage responsible pet ownership.
adapted from www.bbc.co.uk

Two
I’m happy to say our shelter has a couple of special guests. Together with the Born Free Foundation, we have provided a home for two lion cubs. They will stay here for at least three months. The cubs were rescued from Romania and we are going to look after them throughout the quarantine process as we are currently the only centre in town with the facilities to deal with the cubs. The foundation hopes to collect enough money to send them to a reserve in South Africa as soon as possible.
adapted from www.bbc.co.uk

Three
There are two things that are always in short supply at animal shelters – manpower and money. So the two best ways you can help are by volunteering your time or making a donation. If you really love animals, the first option will be much more rewarding.Many animals that have been brought to a shelter are there because they were mistreated or kept in awful conditions. That’s why they need special attention and care. Taking them for a walk or playing with them in a recently opened exercise area would make them happy beyond measure.
adapted from www.helium.com

Four
With more than 125 years of service to animals on the island, the Guernsey Society for the Prevention of Cruelty to Animals has announced plans to renovate part of its animal shelter headquarters in St. Andrews. The development will involve the reconstruction of two buildings so that they will conform to the upcoming changes in animal welfare law, which will become effective this September. When the work is completed, the shelter will have a building that’s up to the highest standards. The work is planned to finish next year and is estimated to cost £1.8 million. The society hopes to obtain a substantial amount of the money through fundraising.
adapted from www.bbc.co.uk

This speaker mentions
A. ideas for entertaining animals living in a shelter.
B. an amount of money already donated to finance an animal shelter.
C. animals placed in a shelter temporarily.
D. legislation which will soon be introduced.
E. the need to change current legislation concerning cruelty to animals.

3.1. The spacesuits which the astronauts wore
A. were equipped with tubes filled with air.
B. helped to control the astronauts’ body temperature.
C. carried away excess water to the cooling system.
D. had a sophisticated texture absorbing space radiation.

3.2. John Young’s shadow in the photograph does not appear natural because
A. this picture is in fact fake.
B. the sunlight fell from the right side.
C. he was in mid-air when the photo was taken.
D. he lost his balance when saluting the American flag.

3.3. According to Professor Jackson, the Moon rock samples brought back by Apollo
A. are older than any rocks of Earth origin.
B. resemble rocks produced artificially.
C. come from a different source than meteorites.
D. have the same features as some Earth rocks.

3.4. The Soviets gave up the idea of landing on the Moon because
A. they felt discouraged by the difficulties faced by the Americans.
B. the cost of the mission would have been higher than they had expected.
C. they focused too much on the preliminary stage of the project.
D. the mission ceased to be a challenge for them after the American success.

3.5. In the interview, Professor Jackson
A. questions the need for space exploration.
B. explains why people come up with hoax theories.
C. criticises NASA for abandoning the space race to the Moon.
D. dismisses doubts concerning the US landing on the Moon. 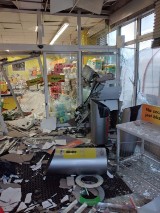 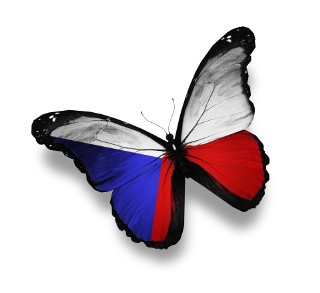